Two Soda Campaign? What About a Third “Party” Choice? 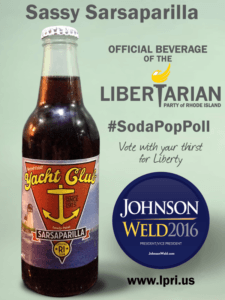 PROVIDENCE, RHODE ISLAND (August 3, 2016) – We all agree that Yacht Club soda is an iconic Rhode Island brand. And (unlike a certain iconic building), we want the independent, family-owned Yacht Club Bottling Works to be around for another 100 years.

Imagine our surprise when we realized Gary Johnson, Libertarian Party candidate for the Presidency of the United States, was not included in Yacht Club’s great #SodaPopPoll.  But Yacht Club Bottling Works owner John Sgambato came right to the rescue.

“Refreshingly different, sarsaparilla – like our candidate Gary Johnson – has its roots firmly planted in the American experience,” said Pat Ford, chairman of the LPRI. “This evening, I plan to toast Governors Johnson and Weld with a refreshing ice cold Yacht Club sarsaparilla. I hope you join me. God bless the United States of America!”